Würstlstände are Austrian sausage stands.  They punctuate the sidewalks of every city in Austria.  People from all walks of life crowd around these kiosks for, say, a quick lunch, or a post-bar snack: a sausage, fried or steamed, served with some manner of bread, mustard, and beer or pop.

While certain types of sausage appear on almost every würstlstand menu, it can be frustrating trying to pin down their characteristics, as a huge variety of sausages can go by the same name.  Bratwurst, for instance, is sometimes based on pork, sometimes on veal, sometimes stuffed into slender lamb casings, sometimes into wider hogs…

Here are some very general descriptions of the most common würste:

Krain is the German name for the Slovenian region of Kranjska, historically called Carniola by English-speakers.  This is one … Continue reading.

Heurigen (“HOY-ree-gen,” singular heuriger) are special taverns in Austria that serve young wine or cider, depending on the region.

The word heuriger literally means something like “of the current year”.  So for instance new potatoes are called heurige erdäpfel.  With regards to wine it refers to wine from the last vintage, ie. wine that has not been bottled or aged.  Heuriger taverns open up for a couple of weeks at a time so that guests can drink young wine and eat plates of cold food such as cheese, spreads, bread, and charcuterie.  The word for these savoury accompaniments is brettljause (“BRET-tel YOW-ze”).  Brett means board, as the food is usually spread out on a wooden board.  Brettl, … Continue reading.

At left is the first harvest from the yard, largely rhubarb and dandelions.

Describing dandelions as “edible” is misleading. The term suggests that they should only be eaten in survival situations. (Would you ever describe spinach, or cheese, or pork, as merely “edible”?)

In reality, dandelions are a treasured leafy green in several European cuisines. They even have an entry in Larousse. Some excerpts from that article:

This is one of my favourite rabbit recipes, and I think a great way to kick off Easter dinner.  This is essentially a rabbit confit, made into a rillette.  First I break up my rabbit.  Then I take all the meaty bits and marinate them for twenty four hours in the following, adapted from Ruhlman’s Charcuterie.  Rub every kilo of rabbit with:

After a day the meat is rinsed and patted dry, then covered with lard and gently cooked in a 180°F oven overnight.  The cooked meat is cooled slightly and pulled … Continue reading. 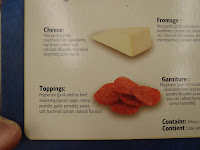 Have you seen this commercial for McCain’s frozen pizza?

“What do other companies put in their pizzas? Something called sodium nitrite…” Those last two words are pronounced with a blend of confusion and self-righteous disgust. The molecular diagram of the compound is flashed across the screen for further effect.

The food industry is quick to pick up on trends.  My generation was taught to read labels, and to mistrust “chemical” ingredients, including curing salt. However:

The resistance to… ‘scientific’ ingredients has always seemed to me misguided. In the objector’s mind a line is drawn between science and cookery, which usually turns out to be entirely arbitrary. No one objects to table salt (sodium chloride) or table sugar (sucrose) in … Continue reading.

Pig’s trotters were a bit of a mystery to me until recently. I had only ever used them in stocks and soups. With so many joints and cartilage, the feet release large amounts of gelatin when simmered, giving the final broth a rich mouthfeel. However, once the feet had delivered their gelatin payload, I always picked them out of the pot and threw them away.

Then I started coming across dishes in which the trotter itself is eaten, notably in the fantastic BBC mini-series Marco. The series, which I think is from the late 1980s, though I don’t know exactly what year, is a glimpse into the kitchen at Harvey’s, a London restaurant where the chef Marco Pierre White … Continue reading.

A pig’s tail is an extension of its spine: a sequence of small vertebrae, surrounded by meat, and fat, and skin. The tail meat itself is not so different than the meat from, say, the shoulder. You are, however, afforded the pleasure of gnawing the meat off the bones.

The tail is a surprisingly tough muscle that needs to be simmered for a few hours to become tender. This got me thinking about the broth that would result from the cooking process. It happens that my second favourite soup of all time is ham soup. When smoked ham hock is simmered with vegetables, the resulting liquid somehow takes on the flavour of the meat without any noticeable detraction from the … Continue reading.

1. a written or spoken expression of one’s regret, remorse, or sorrow for having insulted, failed, injured, or wronged another
2. a defense or justification in speech or writing, as for a cause or doctrine

In February 2011 Button Soup hosted a dinner was based around the least desirable cuts from two hogs, namely:

These cuts contain pounds (pounds!) of good meat and fat that usually end up in the garbage. With a little effort, they made a dinner for six guests, with lots of leftovers. 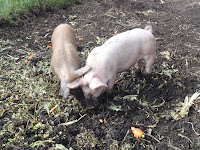 A Quick Apology, in the second sense of the word.

The cooking that I was taught in … Continue reading.