Heurigen (“HOY-ree-gen,” singular heuriger) are special taverns in Austria that serve young wine or cider, depending on the region.

The word heuriger literally means something like “of the current year”.  So for instance new potatoes are called heurige erdäpfel.  With regards to wine it refers to wine from the last vintage, ie. wine that has not been bottled or aged.  Heuriger taverns open up for a couple of weeks at a time so that guests can drink young wine and eat plates of cold food such as cheese, spreads, bread, and charcuterie.  The word for these savoury accompaniments is brettljause (“BRET-tel YOW-ze”).  Brett means board, as the food is usually spread out on a wooden board.  Brettl, I think, is some kind of diminutive form, though I’m not entirely sure. Jause means snack.

While heuriger usually implies wine, there are also most heurigen.  Most is cider, but it is quite different from the commercial ciders available in North America.  It has a pronounced sourness, and in my brief experience it is usually not heavily carbonated.  Sometimes it’s straight up flat.

Since heurigen are open irregularly for short periods throughout the year, the owners will hang an evergreen bough (busch “BOOSH”) over their door or signpost so that passersby will know when they are open.  For this reason, in the province of Styria, heurigen are called buschenschänken (singular buschenschank).  Schank means bar, as in the place where the bartender stands.  The implication is that the wine, intended to be drank young, is stored in barrels and poured from the bar, instead of being bottled for long storage.

I suppose the star of the heuriger show is supposed to be the wine or most, but for me the main attraction was always the charcuterie. So, without further warbling I would like to introduce you to the main players of Austrian charcuterie, as they are served in traditional heurigen.

This is the infamous blood sausage, which we have toyed around with a couple times here on Button Soup.  In Germany it is called blutwurst.  In Austria it is called blunz’n. Austrian blunz’n is a very different creature to English black pudding or French boudin noir.

I attribute the success of my last attempt at blood sausage to the inclusion of a panada, a mixture of milk and bread.  Austrian blunz’n is very heavy on the bread content.  In fact, the first piece I ever had was riddled with white cubes that I assumed were pork fat, but turned out to be bread.  While English black pudding has a pronounced blood taste, and a pastey texture, blunz’n is subtle and light, somtimes more like a dumpling than a sausage. 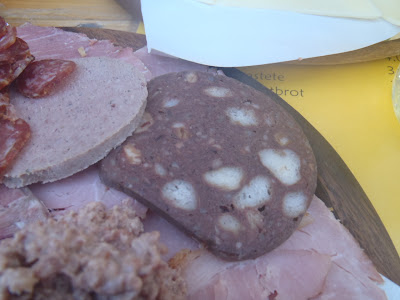 My favourite blunz’n so far had a pleasant acidity to it.  I’m not sure whether this was from added vinegar, or if maybe rye sourdough was used in the panada. 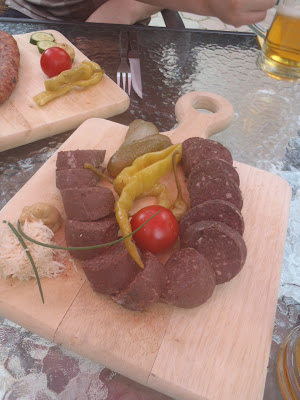 Besides being sliced for cold platters, blunz’n is surprisingly common in the kitchen.  There is a traditional dish called blunz’n gröstl, which is a blood sausage hash.  We also had blunz’n baked into an eggy bread: 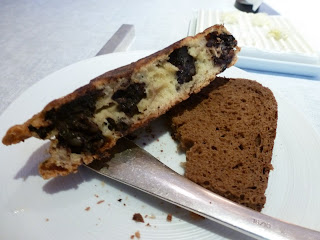 This is a weird one, as you may have guessed by the fact that there is no satisfactory English translation.

The first time I had grammel was in a dish called grammelschmaltzbrot.  It appeared to be rendered pork fat spread on rye bread, with tiny, crunchy flakes that resembled bacon bits, only much smaller, maybe the size of kosher salt crystals.  I asked a handy Austrian what exactly I was eating.  She said, approximately, that when pork fat is rendered and then “pressed” (strained?) you are left with grammel.  I wondered aloud. Bits of skin?  Bits of meat?  She wasn’t sure.

When searching the internet, I came across this explanation, which is well-written, but I think entirely inaccurate.  The author says that grammeln are mineral deposits in the fat of Mangalitzas, an Austro-Hungarian heritage pork breed renouned for its eating quality.  I don’t buy this, simply because I ate plenty of grammel that was not from Mangalitzas.

By Occam’s razor I’m more inclined to believe the sources that say grammel is a form of connective tissue in the fat that cooks out in the rendering process.  Whatever it is, it’s crisp, golden brown, and sinfully savoury.  Its existence is all the more surprising to me because I have rendered a lot of pork fat in the last couple years, but hadn’t thought to skim through the residue to look for something as small and delicous as grammel. 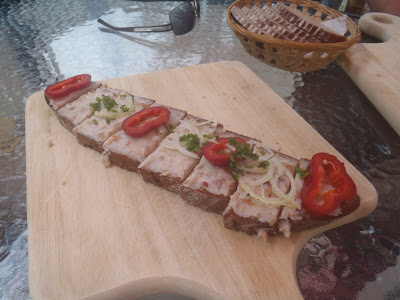 Grammel is also used in the kitchen.  When there is a bit of residual lard on the grammel, it binds to form a paste, which can then be rolled into a knödel (roughly, “KNUH-del,” a dumpling). 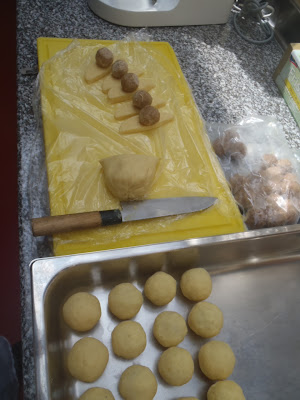 Similar to French saucisson sec, this is an essential component to any heuriger spread.  The most interesting version I had contained the delicious green pumpkin seeds common in Styria. 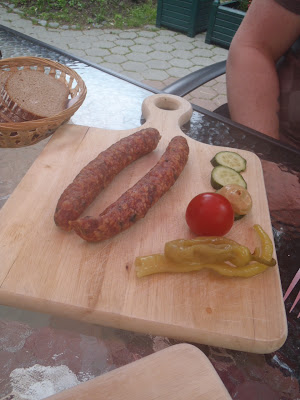 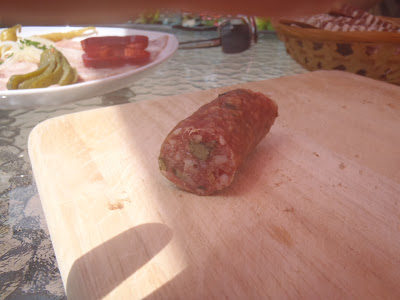 Austrian preßwurst is very similar to our headcheese, though I would say the meat is packed much more densely (ie. there is less jelly between the pieces of meat).  Even so, it holds together extremely well, and can be sliced very thin.  It’s usually doused in vinegar, then called “saure preßwurst.” 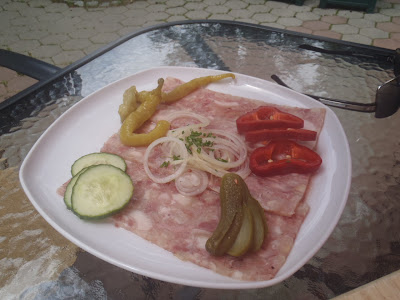 This was a pleasant surprise: pork belly, usually lightly cured, roasted with caraway seeds, and served with the skin on.  A fantastic crunch from the crackling, which splinters into little nuggets during the slicing. 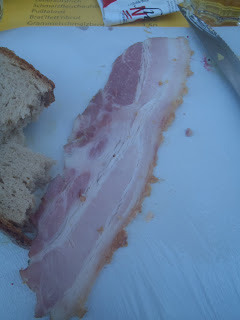 A simple roast, sliced and served cold, is a very common brettljause.  Sometimes the meat is cured, sometimes not.  Somehow the only picture I got of a cold pork roast was this haggard slice below, which I had already prodded with my fork. 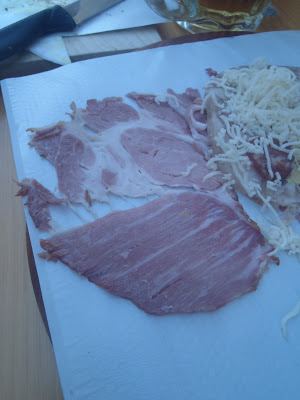 One of the fantastic byproducts of roasting meat is the drippings.  They are comprised of two parts.  First is the highly gelatinous meat juices.  Second is the fat rendered from the meat.  There was a time not so long ago when every housewife would pour the hot pan drippings from a roast into a jar and keep them for later use.  The fat can been scraped off and used to sear meat.  The juices, which solidify when refrigerated, can be used to fortify pan sauces.

In Austria the whole mix, that is, the partially solidified meat juices and the rendered fat, are served as a spread.  It is called bratlfettnbrot, which is possibly the most amusing word in the Austrian language.  Or any language.

In the picture below you can see the bratlfettnbrot in the plastic jar on the right, with the spoon sticking out.  The picture is not from a heuriger, but rather at Dominik’s house.  Dominik was the student Lisa and I hosted last summer.  You may remember him from the fantastic Austrian dinner he and his friends cooked for us while staying in Edmonton. 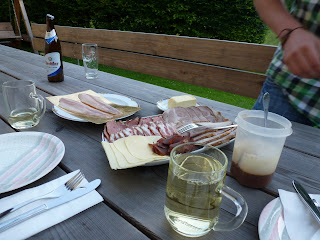 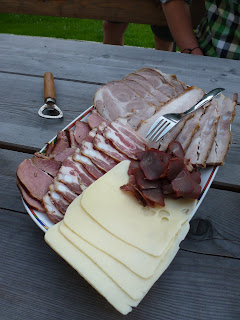 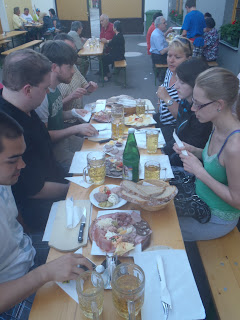