Würstlstände are Austrian sausage stands.  They punctuate the sidewalks of every city in Austria.  People from all walks of life crowd around these kiosks for, say, a quick lunch, or a post-bar snack: a sausage, fried or steamed, served with some manner of bread, mustard, and beer or pop.

While certain types of sausage appear on almost every würstlstand menu, it can be frustrating trying to pin down their characteristics, as a huge variety of sausages can go by the same name.  Bratwurst, for instance, is sometimes based on pork, sometimes on veal, sometimes stuffed into slender lamb casings, sometimes into wider hogs…

Here are some very general descriptions of the most common würste: 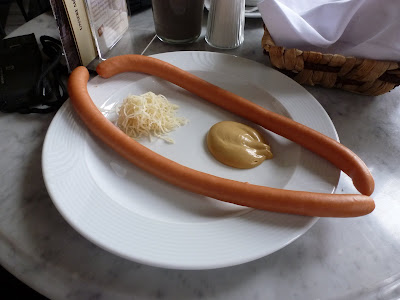 In North America the term “hot dog” refers to both the dish (ie. a wiener in a bun), and the style of wiener itself (ie. an emulsified link flavoured with garlic and smoke).  In Austria a “hot dog” is a sausage shoved into a long, crusty roll.  You can therefore have, for instance, a bratwurst hot dog, or a burenwurst hot dog.  If you don’t specify “hot dog,” your sausage will probably be served with a round crusty bun on the side, as below.  Note the ceramic plate. 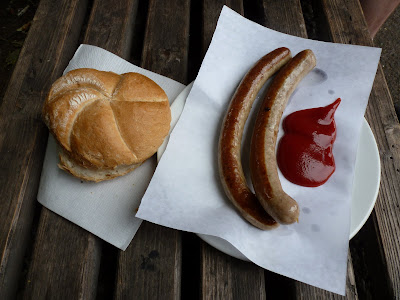