Krain is the German name for the Slovenian region of Kranjska, historically called Carniola by English-speakers.  This is one of those fascinating regions that once had some degree of sovereignty, is no longer a political entity, but still carries the history and identity.  (There are countless such regions in Europe… I wrote about one called the Valpolicella outside Verona.)

Within twenty four hours of returning to Canada I had procured the ingredients for a käsekrainer test batch.

I chose to experiment with Gruyère because of its famous melting properties (it is the go-to cheese for fondue and raclette).  To my surprise, Sylvan Star has their own version of the alpine cheese: 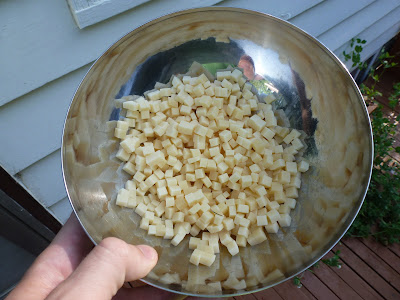 Cut the pork into 1″ cubes.  Spread on a tray lined with wax paper and keep in the freezer until “crunchy” but not frozen solid.  Grind the meat through a 1/4″ plate.  Add the salt and spices to the ground meat. Spread the ground meat onto a tray lined with wax paper and return to the freezer for about 15 minutes.  Regrind the mixture using a 3/16″ plate.

Using the paddle attachment of a stand mixer, slowly mix the forcemeat while adding the corn syrup.  When the force binds and becomes tacky, fold in the cubed cheese. 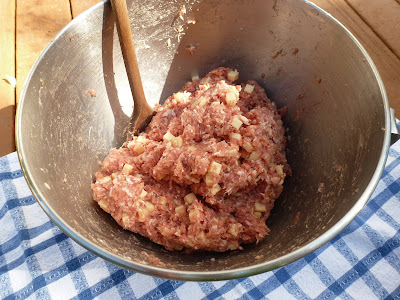 Fry a small piece of the mixture and taste.  Adjust the seasoning as necessary.

Stuff the mixture into the hog casings and twist into 6″ links.  Hang on a wooden dowel to dry for an hour.

The first, when passed through the würstlstand window, looks like any other sausage; it is only upon biting into the link that you discover the cheese.  The second has a crunchy crust of cheese fried onto the exterior of the sausage.  I don’t think I need to spend much time explaining why the latter is superior (the nutty-tangy taste of browned cheese, the accentuation of the textural contrast between sausage skin and interior…)

Having only cooked a couple of käsekrainer links myself, I am still working on my crust development.

Inevitably (and especially in homemade links) some cheese will leak out the ends during cooking.  My working theory on crust development is that the sausage must be rolled through this cheese while it is still gooey, so that the cheese adheres to the skin.  Otherwise the cheese will brown and stick to the pan, instead of the sausage.  As a rule of thumb, move the käsekrainer frequently while cooking.

The sausage must be eaten very hot, or the cheese will re-congeal.

This recipe and cooking process result in an acceptable approximation of an Austrian käsekrainer.  I think that most of the versions I had there were lightly smoked.  While the smoked paprika in my recipe goes some distance to capturing that flavour, I think the next test batch will have to be cold-smoked before frying.