This is the single most useful preparation that I learned in Austria.  It’s invaluable to establishments that use a lot of cured meat, but also a good trick to have in the home kitchen.  It’s called Fleischknödel (approximately: “FL-EYE-SH KNUH-dl”).  Fleisch just means meat, while Knödel is a type of dumpling that is popular in Austria and Bavaria.  Fleischknödel is a fantastic way to use up leftover meat, whether cooked or cured.

Most cooks are familiar with how to use scraps of raw meat.  When butchering a side of pork, for instance, you reserve the miscellaneous bits of meat and fat so they can be ground and used in sausages and forcemeat.

There’s also leftover trim when cutting cooked and cured meat.  Whether you’re using a commercial meat-slicer or just a knife, there is usually an end piece that is not served.  This might be the slightly over-cooked end of a roast, or a dry end of salami.  Or perhaps the meat is just a few days old and you want to bring in fresh product.

Thankfully the Austrians have developed a way to use these leftovers.  They will keep the nubbins from roasts like schweinsbraten and kümmelbraten, fresh sausages, and even dried sausages like kantwurst or hauswürstel. The meat is mixed with cooked onions, then ground, shaped into balls, surrounded with dumpling dough, and cooked.

While most North American homes will not go through as much cooked and cured meat as an Austrian bed and breakfast, there are still times when this preparation can be a life-saver.  I’m thinking especially of ham leftover from Christmas or Easter.

I recently made fleischknödel from the roasts leftover after the Button Soup Canning Bee: a cured, roast pork shoulder, roast pork belly, and roast beef.  The recipe follows. 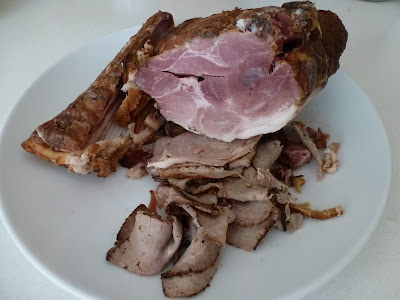 Note 1: A good mixture would be 3/4 cured, cooked meat such as ham, and 1/4 dry-cured sausages.  Fresh (un-cured) cooked meat like pork chops and roast beef give the mixture a mushy texture and should be used in moderation.

Combine the meat and onions and grind using a small die. 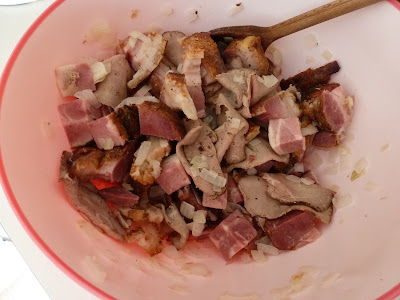 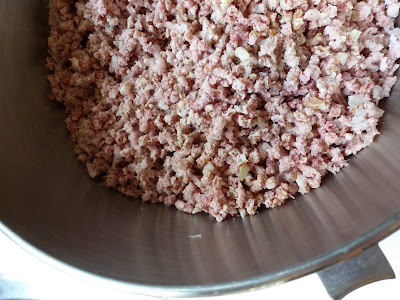 Shape the meat and onion mixture into little balls about an inch across.  Put the balls on a sheet pan lined with parchment and freeze. 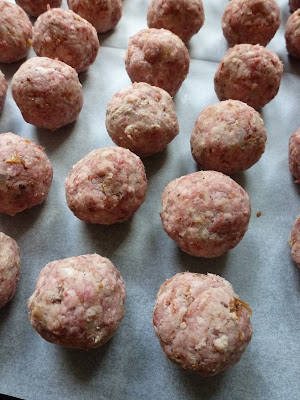 Combine all remaining ingredients and knead until a soft, tacky dough forms.  Do not over-knead.  Shape the dough into a log.

Remove the frozen meat balls from the freezer.  Cut a round from the dough and press a meat ball into it.  Work the dough around the ball to cover it evenly.  Repeat until all the balls are covered in dough.

You can now freeze these dumplings. 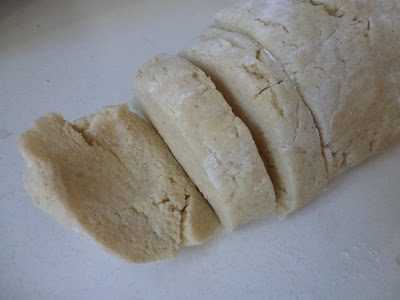 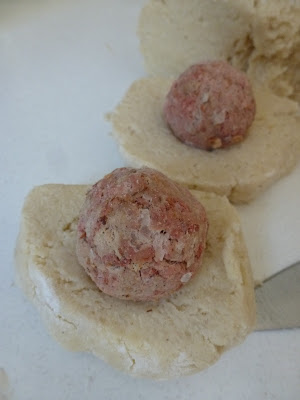 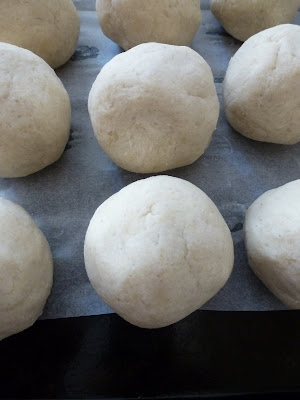 Traditionally fleischknödel are boiled and served with warm cabbage salad.  They can also be breaded and fried for some textural contrast that (to speak like Guy Fieri) puts the dish over the top. 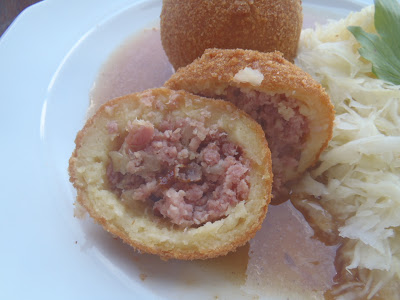