We’ve tried a lot of things with dandelions.  The leaves are great.  Hopefully everybody knows that by now.  I’ve made syrups with the flowers, but truthfully they don’t have much flavour and are only good for their sunny colour.  The roots are delicious roasted and useful in bitter infusions, but they are such a bitch to harvest I rarely bother.  The flower buds can be pickled, but while they look a good deal like capers they don’t actually have much flavour of their own, and certainly don’t have the distinct mustard-like pop of their Mediterranean look-alikes.

Dandelion crowns might be the tastiest part of the plant.

The crown is where the root transitions to the stalks.  It is only slightly … Continue reading.

Last year I wrote briefly about evergreen syrup, flavoured with the flourescent, tender bundles of needles that appear on spruce trees in spring.  I first came across this preparation in Austria, where the restaurant I was working at used the syrup to flavour a sauce accompanying the roasted leg of a May deer, a fantastic, fantastic example of terroir-driven flavour pairing.  The syrup also has obvious applications in the pastry kitchen.

This week I made the syrup myself for the first time, and I want to relate a few of the details of its preparation.

I’m kicking myself for not getting an exact recipe from Looshaus.  I recall that they brought the syrup and evergreen tips to a … Continue reading.

Most of the highbush cranberries in the nearby park have lengthened into a distinct oval shape, which means they’re ready for picking.

Often when harvesting or foraging in balmy summer, I find myself looking forward to the colder months ahead.

Much of the past year has been devoted to exploring seasonality beyond ingredients: looking at traditional dishes and meals that mark the season.  I pick highbush cranberries mostly for use in two meals: Thanksgiving and Christmas dinners.  (If there’s a little extra that can be enjoyed in November with some game meats, all the better.)  So as I romp through the bush in late summer, I’m actually thinking about fall and winter.

Similarly, when candying cherries in August, I might … Continue reading.

While on the AMS Great Alberta mushroom foray near Hinton, we came across some large patches of Labrador tea. 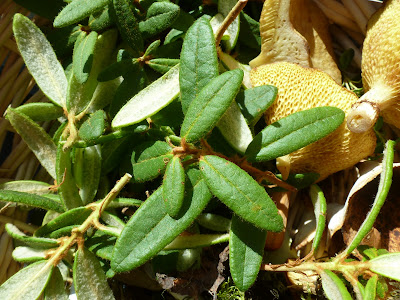 Labrador tea is a little evergreen shrub.  It was once commonly brewed by the natives and used in countless medicinal applications.  It was also part of some of the traditional gruit mixtures of northern Europe.  (For an explanation of gruit, and why it could be important to our provincial brewing identity, please see Alberta Beer: A Thought Experiment.)

The principle flavour is minty evergreen.  I swear when I bruise the fresh leaves I also get a sweet melon aroma, but I haven’t been able to convince others of this, nor have I been able to coax that flavour into solution.  … Continue reading.

With Allan in Austria, I have been tasked with keeping him informed of what’s happening in our new yard, and documenting developments with copious photographs and notes.

A couple weeks ago, the several lilac trees scattered throughout our yard burst into full bloom, filling the air with sweet perfume.  Last year we learned that these flowers are edible.  The tiny flowers can be added to salads for a splash of color.  They can also be made into beautiful, delicate candies that last long after the blossoms have fallen from the trees and their sweet smell has left the air.  Rather than keeping the memories of spring with mere photographs, … Continue reading.

A nifty trick I picked up at Looshaus, a hotel and restaurant in Kreuzberg, Lower Austria.

Pick evergreen “buds” (the small bundles of new needles that appear in late spring), simmer them in simple syrup (1:1 water to sugar), and transfer the whole mess into glass jars.  The syrup takes on a fantastic, minty, pine flavour, which the Looshaus chef says gets even better with a few months storage.  Strain the needles out before using the syrup.

Some ideas for usage:

The same process can be used for other common backyard plants, like dandelion … Continue reading.

At left is the first harvest from the yard, largely rhubarb and dandelions.

Describing dandelions as “edible” is misleading. The term suggests that they should only be eaten in survival situations. (Would you ever describe spinach, or cheese, or pork, as merely “edible”?)

In reality, dandelions are a treasured leafy green in several European cuisines. They even have an entry in Larousse. Some excerpts from that article:

Caragana has a reputation similar to that of poplar trees, verging on “weed” status. The growth has a spiny appearance that most find unattractive. The plants sucker, and produce exploding pods that throw seeds everywhere. Plus they require lots of trimming just to stay presentable.

Caragana is native to places like (go figure…) Siberia, and was brought to the Canadian west in the 1880s.[1] It is extremely drought-resistant and was used extensively in farmhouse shelterbelts. I would guess that it’s the second most common hedge in Edmonton, after cotoneaster, though you are much more likely to see it in older communities like Garneau than, say, Terwilliger. It also grows wild in the Edmonton river valley.

In the early summer, … Continue reading.

My mind is still reeling from the Labour Day weekend, when Lisa and I attended the Great Alberta Foray in the Bow and Kananaskis valleys. The foray was run by the Alberta Mycological Society.

One month ago, I didn’t know what mushrooms were. Of course I had cooked and eaten them, but I didn’t understand, for instance, their anatomy (why do they have gills?) or their role in my front lawn (why do they grow in rings?).

Here are some mushroom basics I learned that weekend.

1. Mushrooms are the fruiting bodies of fungi.

I was sure of one fact before attending the foray: mushrooms are fungi. (Mycologists, however, pronounce the word with a soft “g”, which precludes any … Continue reading. 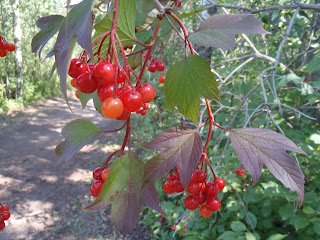 Cornucopic clusters of chokecherries hang along the trails of the river valley this … Continue reading.