The best time to plant a plum tree is twenty years ago. The second best time is now.

-“Chinese proverb” (probably not though…)

We have two Japanese plum trees in our yard. The cultivar names are confusingly but unmistakably Slavic: Ivanovka and Ptitsin #3.[1] The trees were purchased as cuttings from the University of Saskatchewan, but the varieties were first developed at the Morden Research Station in Manitoba and first released in 1939.[2] We chose these specific varieties for their cold-heartiness, fruit quality, and pollination requirements.

For most of our other fruit trees we didn’t have to give much thought to pollination. Our sour cherries, for instance, are all self-pollinating. And while apples must … Continue reading.

If any food can be described as ephemeral, it’s squash blossoms. They’re only around for a short while, and once picked they deteriorate rapidly, which is why you usually can’t get them at grocery stores, only farmers’ markets and neighbourhood gardens.

Generally there are more male flowers than female.  The male flowers can be picked without affecting the production of fruit, so long as a few are left behind … Continue reading.

The gnarly root pictured at left is horseradish.

Horseradish is a hearty plant; it can flourish almost anywhere in our fair city.  I remember when I was in culinary school I would catch a bus at the intersection of 118 Avenue and 106 Street, and there was a perfectly healthy horseradish plant living in a crack in the sidewalk.

Horseradish could in fact be described as invasive.  It doesn’t spread too fast, but once it’s established, it’s nearly impossible to remove.  I hack enormous chunks out of the root system of my plant and it always recovers.

The root has a pungent flavour very similar flavour to its relatives mustard and wasabi.  (Actually most of the “wasabi” that you’ve eaten … Continue reading.

I have to admit that this summer came with many, many gardening disasters.  “Gardening lessons” maybe is a better way to think of it.  There were, for instance, some hard lessons in soil fertility.

Last summer we got some trees cut down and we were left with a staggering amount of mulch, mulch that I slowly and laboriously transferred to our many garden beds.  At the time I thought that since I was adding organic matter to the beds I was improving the soil.  I planted chard, onion, kale, spinach, and potatoes in those beds, but only the potatoes became proper plants, and even then they produced small, scant tubers.

It turns out by adding all that mulch I built … Continue reading.

For the last two or three years Button Soup has been largely about animals. Pigs, especially.  It must seem that I eat pork chops and sausages every night.  In reality I don’t consider myself a voracious meat-eater.

That being said, I do find animals pretty easy to understand.  They really are all the same: cows, chickens, pigs, and aardvarks.  All mother-animals and father-animals reproduce more or less the same way, a way very familiar to us humans.  The baby-animals eat food and grow up and reproduce similarly, and if you cut their throat they die and you can eat them.  I know there are exceptions to some of these statements, but really animals are easy.

This is one of those “probably more than you wanted to know about…” posts, but when one plant has a hundred names, I’m always curious for an explanation.

A cold-hardy bush that produces delicious, anti-oxidant-rich berries of striking colour and interesting shapes as early as June, the haskap has captured the attention of a diverse group of obsessives: gardeners, nutritionists, chefs, and linguists, to name a few.

Haskaps are native to several far flung regions in the northern hemisphere, and most often found in or near bogs in boreal forests. They go by a dizzying number of names, some of which are described below.  For clarity’s sake, the plant we are discussing is Lonicera caerulea.  There are four notable … Continue reading.

I’m writing about this because I know next to nothing about plants, or how they germinate and grow and proliferate.  Really.  Almost nothing.  This week I learned a few simple guidelines for maintaining raspberry bushes that made a mark on my neophyte mind.

When we moved into our house about a year ago we inherited no less than three raspberry stands.  I’m not sure of the variety, but based on descriptions I’ve read I would guess they are Boyne raspberries.

Raspberries grow on stalks called canes.  Over the winter I often pondered the canes standing in my backyard.  Were they dead?  Dormant?  Would they produce fruit next year?  Did I need to do anything to care for them?

Whatever the … Continue reading.

In January, Lisa and I bought a house in McKernan.  The backyard was a gift that spring has recently unwrapped for us.  Over the last couple weeks we’ve discovered that the previous owners of this house were active gardeners who established a mass of edible perennials.

Following are the edible plants that are appearing in our yard.  If you think we’ve misidentified anything, please let me know.  (We’re new at this…) 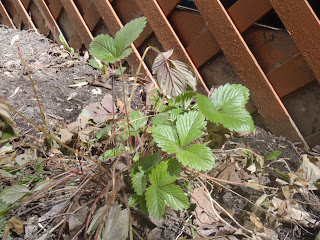 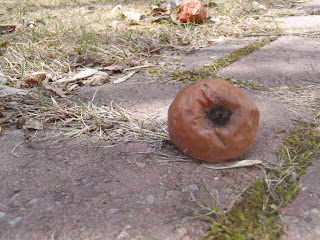 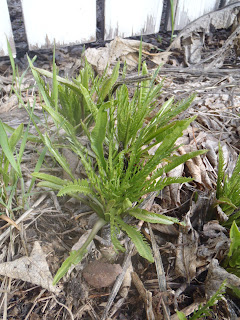 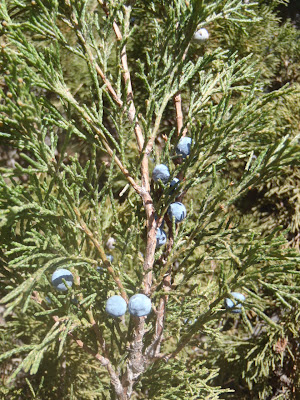 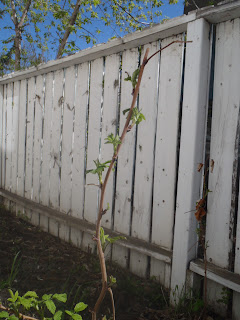 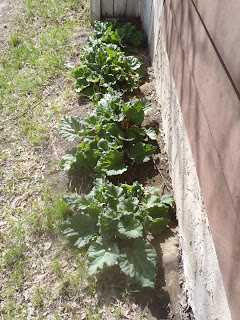 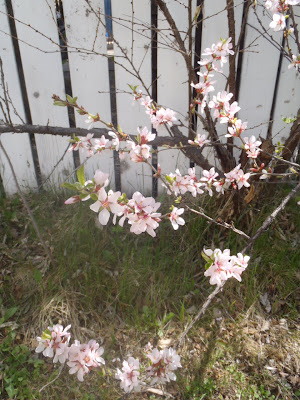 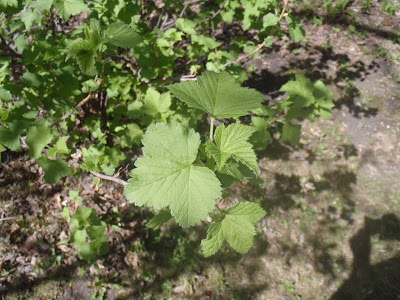 Part I: Horseradish as Weed

Horseradish is a common weed in Edmonton, as invasive as it is delicious. The plant is pretty easy to identify by its distinctive curly leaves. If allowed to flourish, they eventually grow into wild, drooping masses that look like Sideshow Bob’s hair. There happens to be a particularly robust example in a friend’s back alley. I visited it this morning to see if my clumsy attempt at harvesting it last summer had killed it. As you can see, it’s doing fine. You can also see all the dead stalks from last year’s growth around the base. It’s a very prodigious plant.

Last summer I was invited to help myself to the spicy root of … Continue reading.