If any food can be described as ephemeral, it’s squash blossoms. They’re only around for a short while, and once picked they deteriorate rapidly, which is why you usually can’t get them at grocery stores, only farmers’ markets and neighbourhood gardens.

Generally there are more male flowers than female.  The male flowers can be picked without affecting the production of fruit, so long as a few are left behind … Continue reading.

When I was little I watched cartoons on Saturday mornings.

At one o’clock custody of the television passed to my mother, who watched Victory Garden, an American public television show that tours some of America’s greatest gardens.

I hated this show.

Now that I’m all growed up, I rather like it.  A couple years ago I was watching Victory Garden when they interviewed a chef from Boston who used sunflowers like artichokes.  I filed this idea in the deeper recesses of my brain until this summer, when I came into some sunflowers from Tipi Creek.

I pulled out the flower petals, then started cutting away the dark brown seed heads until I had something that looked sort of kind of … Continue reading. 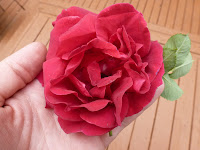 The idea of eating my provincial flower excites me.  Unfortunately, our true wild roses have already lost their petals and developed hips.  There are, however, several late-blooming domestic varieties still flowering.

Wherever you get your roses from, make sure that they haven’t been treated with any chemicals.

The set-up is simple.  Start with a very large pot.  I used my canning pot.  Put a clean brick or heavy ceramic dish in the middle of the bottom.  Scatter the rose petals around the brick.  … Continue reading.

With Allan in Austria, I have been tasked with keeping him informed of what’s happening in our new yard, and documenting developments with copious photographs and notes.

A couple weeks ago, the several lilac trees scattered throughout our yard burst into full bloom, filling the air with sweet perfume.  Last year we learned that these flowers are edible.  The tiny flowers can be added to salads for a splash of color.  They can also be made into beautiful, delicate candies that last long after the blossoms have fallen from the trees and their sweet smell has left the air.  Rather than keeping the memories of spring with mere photographs, … Continue reading.