–Address to a Haggis, Robert Burns 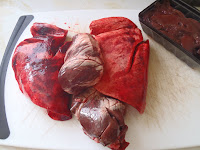 Haggis is made of a sheep’s pluck, which is a tidy term for the lungs, heart, and liver. Traditionally these parts would be boiled, ground, mixed with oats and onions, then stuffed into a cleansed sheep’s stomach, making what is essentially a large, round sausage.

Sheep are rarely brought to maturity in North America, so all the offal I used was from a lamb. Lamb bits are smaller and milder in flavour than sheep bits.

Most of the ingredients are easier to obtain than you might expect. Four Whistle Farm routinely brings offal of all sorts to the Strathcona market, so all you have to do is send a quick e-mail to Marius to confirm that the required organs will be there on the required Saturday. (The lungs, discouragingly, are not held in the “Lamb” section of the display, but the “Dog Food” section…)  More recently I have been buying whole lambs from Tangle Ridge Ranch, and they have been providing me with the offal.

The only real trouble is the stomach. I have approached a few vendors. Most give excuses, citing, for instance, “regulations” or some such nonsense. Others say plainly that the abattoir doesn’t like to do weird things like that. Apparently harvesting the stomach requires extensive cleaning and blanching that most abattoirs aren’t set up for.

As such I use a beef bung instead of a sheep’s stomach. A beef bung is a long, dead-end portion of the cow’s intestinal tract. Once stuffed it is about five inches across and a few feet long. It is the traditional casing for mortadella and cappicola. I have a sneaking suspicion that many of the images of haggis I came across during my research were actually made with beef bung.

Haggis
Adapted from The Scots Kitchen

Traditionally the raw offal is thrown in a pot of boiling water, but searing in a hot pan first adds some extra colour and flavour. 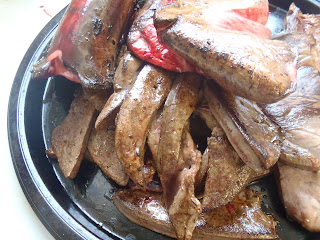 Put the seared offal in a large pot. If you are lucky and your lungs are still attached to their windpipe, drape the windpipe over the edge of the pot so that any fluid expelled by the lungs doesn’t end up in your water. If you don’t have a windpipe, don’t worry. Cover the offal with cold water, then bring the pot to a boil. The lungs, as you might expect, want to float, so you’ll have to weigh them down. I used a plate and a tin can because I’m classy.

Simmer for an hour and a half. All kinds of ungodly brown scum will form on the surface, especially if you don’t have the windpipe as a purge line. If you are very diligent with the skimming, you may still be able to use some of the flavourful cooking liquid later on. 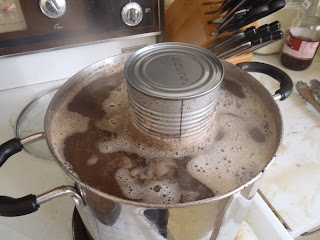 Chill the cooked offal thoroughly. Mix with the fat, onions, salt, and spices. 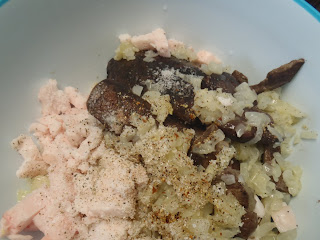 Grind the mixture through a 3/16″ plate. 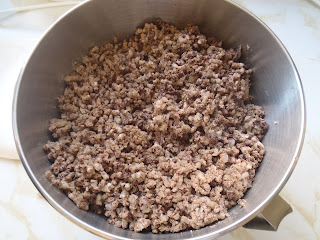 Add the toasted oats to the ground offal. Mix on a low speed, slowly incorporating a bit of the boiling liquid. If your boiling liquid was deemed undesirable, use stock. The forcemeat should become somewhat paste-like. 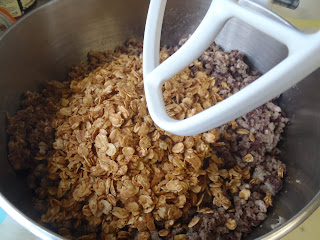 Soak the beef bung for about an hour. Rinse thoroughly inside and out. 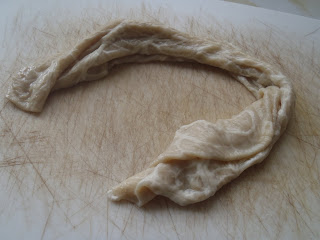 Roll up your sleeves and stuff the forcemeat into the bung. Pack it tightly, ensuring there are no air pockets. Traditionally the sheep’s stomach would be sewn shut (hence the line “Your pin wad help to mend a mill / In time o’ need” in the Address to a Haggis.) Working with the beef bung, I simply tied the open end in a large knot. 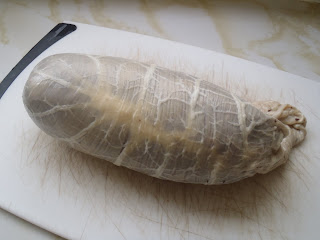 Simmer the haggis until heated through, about two hours. The beef bung, just so you know, is not usually consumed; it’s just a vessel. 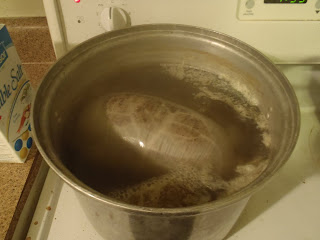 Clapshot is mashed turnips (“neeps”) and potatoes (“tatties”). I have no idea where the term comes from. The classic recipe uses equal parts of each, but since turnips are so much moister than potatoes, I prefer one part turnip to two parts potato.

Peel the potatoes and turnips and cut them into large chunks. Boil them in separate pots, as they take different lengths of time to cook. Simmer each until very tender, but not falling apart. Pass the vegetables through a food mill while still warm. Combine, then spread on a tray to cool thoroughly. This can be done the night before the meal.

To serve, heat the milled vegetables with a bit of lamb stock. Beat in cubes of butter, and season with salt and pepper.

This really is the perfect accompaniment to the haggis. The sweetness of the turnips compliments the savoury offal. The slightly fluid nature of the mash allows it to mingle with the haggis. 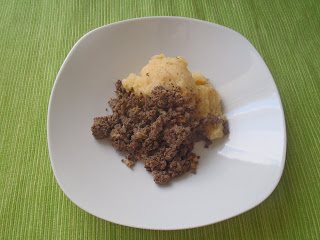 You would expect offal boiled for hours to be tough and dry, but the grinding tenderizes the meat and glands, and the onions and stock-drenched oats give moisture. The final mix looks a lot like ground beef, but it’s much lighter and moister than hamburger.