1. Clean the head. This was the first time I’ve worked with a whole pig’s head. Usually the entire animal is cut in half down the spine and through the head. Bath chaps require an intact head. If you ask your pork vendor really, really nicely, they should be able to get one for you.

The head must be cleaned thoroughly. Considering how much hair is on a live pig, the abattoirs do a pretty good job of cleaning them up, but there will always be some persistent whiskers that need to be shaved or singed off with a blowtorch. Beware that burning hair has a very strong, peculiar smell, so it’s best to work outside or at the very least under a proper vent hood. After singeing, scrape the black residue away with a knife and wipe the skin clean. There will be a few nooks that need to be cleaned, notably the folds of the ears. Q-tips don’t stand a chance: you have to use a slender knife. You may find it easier to clean the inner parts of the ear after the head has been boned out. Actually I sometimes cut the ear canals out instead of cleaning them. 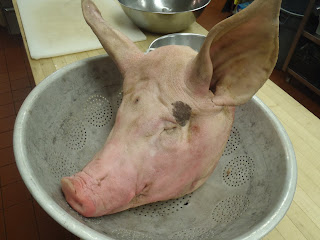 2. Bone out the head. You can remove all of the flesh from the skull in one piece. Make an incision under the chin, then start cutting the jowls away from the jaw, staying as close to the bone as possible. Work up the jaws, past the temples and eyes to the earls and forehead, and finish with the snout. There is a good video of Chris Cosentino boning out a head here. He also describes the basic process for making porchetta di testa

Once the meat has been removed from the skull, the tongue can be harvested. My first inclination was to open the pig’s mouth and cut out the tongue, but by the magic of rigor mortis, the jaw muscle was thoroughly seized. The best course of action is to cut and pull the tongue out through the bottom jaw. A detailed description of the process can be read here (the description is for game animals, but the details are transferable to swine…)

You should now have one sheet of flesh and one tongue. 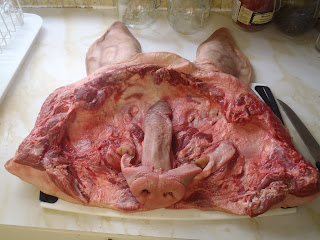 3. Cure the meat. I cured the head and tongue as I do bacon, pancetta, and jowls (“guanciale”). My “house cure” contains fir (part of my ongoing attempt to eat my Christmas tree), juniper, brown sugar, black pepper, kosher salt, curing salt, bay, garlic, nutmeg, and herbs. Cover the meat with the cure and leave for a week in the fridge, or until the flesh is firm throughout. 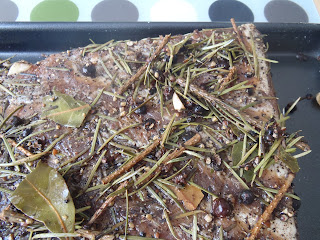 4. Roll and tie the meat. In the video mentioned above, Cosentino tucks the tongue into the snout, then rolls the entire sheet of flesh in one direction. His finished cross-section is one spiral.

I tried a different rolling method, one that was intended to preserve the natural shape of the head, with the bulbous “brain portion” tapering to the snout. I rolled the two jowls towards the centre. The rolled head looked absolutely ridiculous (see below), especially with the awkward seam where the two rolled jowls met. In the end, however, I think it resulted in a more interesting cross-section. I’ll talk more about that later. 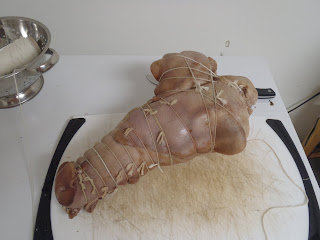 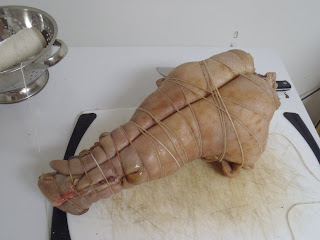 5. Cook the bath chaps. Ideally this is done by sealing the chaps in plastic and cooking sous-vide. There are several advantages to the vacuum packing:

Unfortunately I didn’t have access to a vacuum packer, so I just covered the bath chaps in cheesecloth and simmered them. I threw some mirepoix into the poaching liquid. 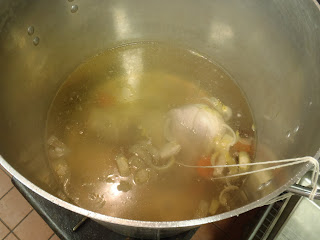 6. Slice. Frankly I was discouraged by how ridiculous the bath chaps looked in their whole, uncooked form, but when I sliced them after cooking, I was overjoyed. The cross-section was striking and distinctive: the shades of red and pink and white, the symmetrical curls of the jowls, the bright band of ear cartilage clinging to the perimeter. 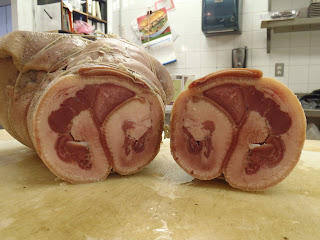 7. Consume. You might expect something like this to taste as odd as it looks. This was not the case, not by a long shot. Honestly it tasted like bologna. Most of the interest came from textural interplay: the firm meat, the slightly chewy skin, and the crunch of the ear. 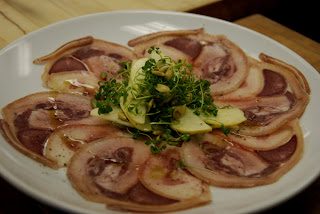 The meat was sliced very thinly, arranged on a broad, round plate, sprinkled with salt, black pepper, and pumpkin seed oil, and garnished with the following salad.

This is a preparation that I’m sure I will try again at some point. Next time I would like to vacuum-pack the bath chaps before simmering, as I think a lot of the flavour from my cure was lost to the cooking liquid.