A pig’s tail is an extension of its spine: a sequence of small vertebrae, surrounded by meat, and fat, and skin. The tail meat itself is not so different than the meat from, say, the shoulder. You are, however, afforded the pleasure of gnawing the meat off the bones.

The tail is a surprisingly tough muscle that needs to be simmered for a few hours to become tender. This got me thinking about the broth that would result from the cooking process. It happens that my second favourite soup of all time is ham soup. When smoked ham hock is simmered with vegetables, the resulting liquid somehow takes on the flavour of the meat without any noticeable detraction from the flavour of the hock itself. The final soup is comforting, smoky, salty, savoury, perfect for cold weather, and a great example of the ingenuity inherent in so many simple, frugal dishes. I decided I would serve the tail-broth alongside the crisp tail.

As with heads, tails usually have some whiskers that need to be shaved or singed. You can see that my tails both had a small piece of the rump still attached. That meat was later used as a garnish for the broth. 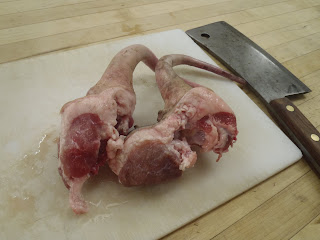 With the ham hock soup in mind, I kept the tails in a standard brine (salt, brown sugar, curing salt, herbs) for about a week. 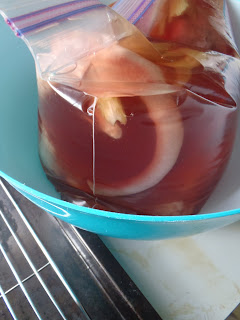 After brining, the tails were patted dry and left overnight in the fridge, uncovered, to dry out the surface. The next day they were hot-smoked, then simmered with vegetables, herbs, and, to add a little body to the finished stock, a couple of trotter bones.

Once the meat was tender, about three hours, the broth was strained and chilled so that the fat could be removed.

I pulled the chunks of rump meat from the tails, then cut the curly-queues into segments. Each tail was about nine inches long, so with six diners, everyone got a three inch piece. 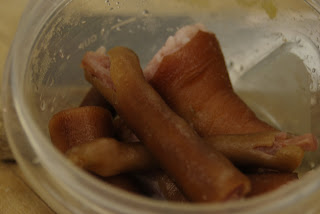 We coated the tails with seasoned flour, egg wash, and bread crumbs. 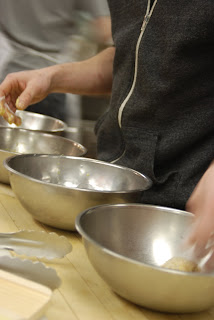 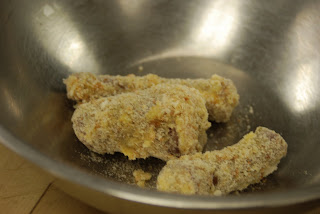 Finally we fried the tails until brown and crisp. They were served with hot mustard. Brined, smoked pork, clinging to a bone: a bit like a ham lollipop. 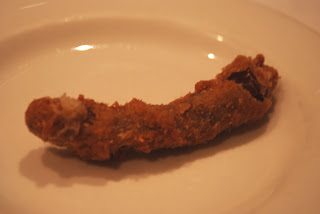 The broth was reheated and simmered with a few sprigs of rosemary. Once thoroughly infused, it was poured over green lentils, vegetables, and some of the shredded rump.

The flavours were simple and direct: smoke, rosemary, and pork. A restorative broth to be sure. 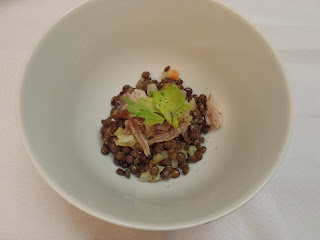 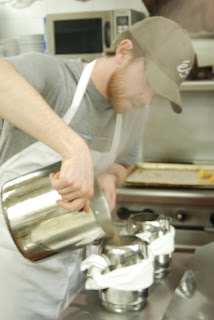 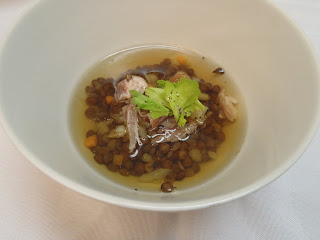