Pig’s trotters were a bit of a mystery to me until recently. I had only ever used them in stocks and soups. With so many joints and cartilage, the feet release large amounts of gelatin when simmered, giving the final broth a rich mouthfeel. However, once the feet had delivered their gelatin payload, I always picked them out of the pot and threw them away.

Then I started coming across dishes in which the trotter itself is eaten, notably in the fantastic BBC mini-series Marco. The series, which I think is from the late 1980s, though I don’t know exactly what year, is a glimpse into the kitchen at Harvey’s, a London restaurant where the chef Marco Pierre White was setting the British cooking scene ablaze. Marco is precocious, demanding, and eloquent. The show is so beautiful it makes grown line-cooks weep (gaudy 1980’s plating notwithstanding).

Anyways, in the episode entitled “Marco cooks for Raymond Blanc,” Marco prepares a dish called trotters Pierre Koffmann: a boned pig’s foot stuffed with chicken mousseline, veal sweetbreads, and morel mushrooms. I wondered: when you eat a trotter, what exactly are you eating? Is there meat to be had? I resolved to cook them myself and find out.

This trotter dish is based on Marco’s, but with a simpler stuffing: potatoes and morels.

Use a blow torch to remove any hairs. This is how one of the cleaned trotters looked: 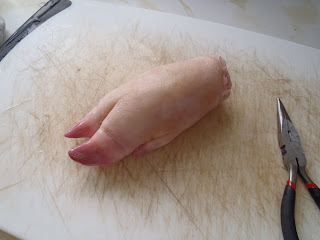 Next remove the long foot bone. There is footage of Marco boning a trotter in the above mentioned “Marco Cooks for Raymond Blanc”. You can watch it here. It takes him about ten seconds.

An incision is made along the back of the trotter, and the skin is then cut away from the bone. 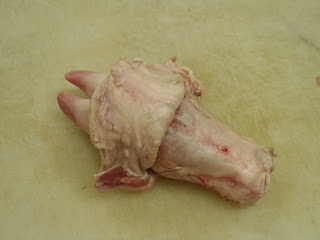 Be extremely careful not to nick the skin with the knife. When you cook the trotter, small cuts will open and become large holes. Continue to remove the skin until you reach the joints where the two outside claws connect to the foot. Cut through these joints, then snap the joints on the two central claws by bending them. It takes a bit of muscle. Sever the broken joint with your knife.

You are left with a sheet of skin attached to four little toes.

I cooked the boned trotters in a mixture that was one part light chicken stock and one part brown ale, with a handful of mirepoix thrown in for good measure. Simmer the trotters very gently for about three hours. It’s important to cook the trotter thoroughly without overcooking. If you simmer too long, the sheet of skin will fall apart, and you won’t be able to stuff it.

When the trotters were done I strained the cooking liquid and reduced it to make a sauce for the finished dish. A dark, malty, and slightly bitter sauce.

Reconstitute the morels by soaking them in cold water. Save the soaking liquid; it’s almost as valuable as the mushrooms themselves.

Peel some starchy potatoes, cut them into manageable cubes, and simmer until tender. Mill the potatoes while still hot.

Add oil to a hot pan. Sauté the morels. Add some finely diced onion, lower the heat, and cook until translucent. In a separate pot, bring a small amount of the morel soaking water to a boil. Add the milled potatoes. Stir while adding several cubes of butter. Fold in the morels and onions and season the mixture.

Fill the feet with the potatoes. Wrap the feet first in caul fat, then in foil or plastic. Leave the wrapped trotters in the fridge overnight. They’ll set, and be much easier to work with the next day. 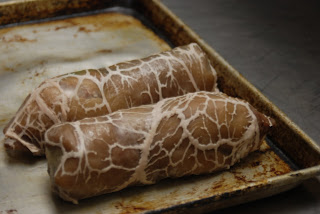 The accompaniment to the stuffed trotter was braised cabbage, the foundation of which (in my house, anyways) is always bacon fat and onions. In this case a cured jowl was used. 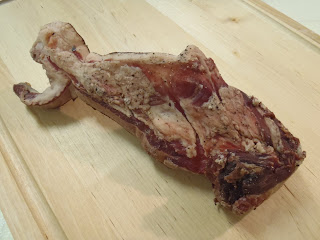 Rendered as much fat as possible from the jowl, then sautéed the onions and cabbage in that liquid gold. 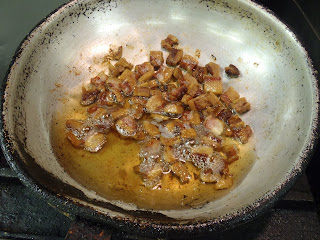 Add cider vinegar and stock, and cover the pot until the cabbage is tender. 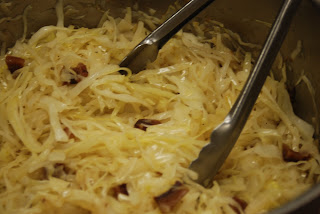 Brown the trotters over high heat. If you’ve ever made crackling, you know that skin tends to pop when cooked at high temperatures. These feet, covered in skin as they were, spit oil everywhere. It was terrifying. 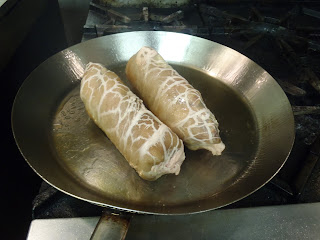 Once thoroughly browned, keep the trotters in the oven until heated through.

Cut the trotters into sections and rest them on the cabbage.  Finish with a bit of the beer reduction. 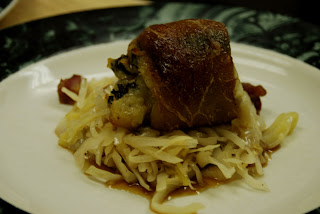 This was far and away the most surprising dish of the night. It was utterly unlike anything I have eaten before. Turns out there isn’t any meat in the trotter; it’s pretty much just skin, with a bit of fat and connective tissue underneath. The finished dish had an overwhelming gelatinous, sticky mouthfeel. It was one of the riches dishes I’ve ever eaten. The cabbage accompaniment, with the cider vinegar, was designed to cut some of that richness, but the real hero in that regard was a jug of Kevin’s apple wine, which cut through the trotter like a lance.

I really enjoyed the dish. However, with all the starch, fat, and acid, the morels never stood a chance. I would omit them in future attempts. 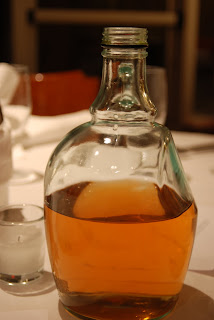