There aren’t any McDonald’s in Webbwood, Ontario, so in my mom’s house, Friday dinner was always macaroni and cheese, usually with fish cakes. Her family observed these meatless Fridays for decades after 1966. In fact when I was growing up, I had macaroni and cheese for dinner every Friday.  We also had this meal on Ash Wednesday.  No food could be taken between meals.  It’s a modest concept of “fasting,” but any form of self-denial is noteworthy in our society.

Restaurants are tapping into nostalgia with gourmet re-inventions of mac and cheese.  In the last year I have eaten macaroni at The Sugar Bowl, Urban Diner, Hardware Grill (served with loin and belly of pork – a combination borrowed from The Fat Duck), Avenue Diner (in Calgary) and Farm (in Calgary). These versions were all made with a Mornay sauce: a bechamel (roux and milk) with cheese. Some were finished with truffle oil.

My mom’s mac and cheese has three ingredients: parboiled macaroni, canned tomato juice, and grated cheddar are mixed in a casserole and baked in the oven until the juice has reduced to a sauce and the cheese has formed a crust on the top. Taken with black pepper.

Below is a picture of this year’s Ash Wednesday dinner: macaroni in cheddar, with canned tomatoes (the last of last season!) and dried hot peppers. 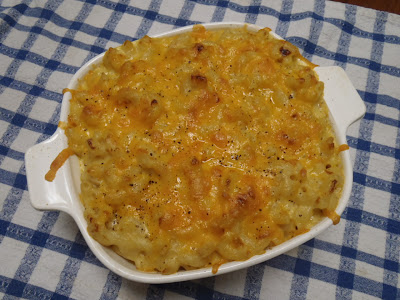 1.  The history of the Filet o’ Fish is detailed in this article from USA Today