I think I remember scallop potatoes more fondly than any other form of the tuber.  Maybe French fries were more highly prized when I was a child, but truth be told I ate them much more often than scallop potatoes.  Scallop potatoes, being a casserole dish, was reserved for large dinners, especially Easter.

At its core the dish is potatoes, cut into rounds (scalloped), then baked in cream and cheese.  There are obviously countless variations; I know some mothers who bake their scallop potatoes in mushroom or onion soup mix.  There is a classic French dish called pommes à la dauphinois that is identical to scallop potatoes.  The addition of grated cheese to the top of the dish would make … Continue reading.

The food commonly eaten on Easter Sunday is rich in symbolism.  The ingredients and dishes are rooted in two traditions: the Jewish Passover dinner, or Seder, and the pagan springtime festival of renewal and fertility.  Easter food shows how these two traditions have combined to form our current concept of the holiday.

Growing up, Easter Sundays began with a church service that re-enacts the last supper of Christ, which was a Seder.  The first “meal” that we ate on Easter Sunday was therefore a meager one: the sacrament of communion, an unleavened wafer and a sip of red wine.
It is said that when the pharaoh freed the Hebrews, they fled Egypt so abruptly that they didn’t … Continue reading.

There aren’t any McDonald’s in Webbwood, Ontario, so in my mom’s house, Friday dinner was always macaroni and cheese, usually with fish cakes. Her family observed these meatless Fridays for decades after 1966. In fact when I was growing up, I had macaroni and cheese for dinner every Friday.  We also had this meal on Ash Wednesday.  No food … Continue reading. 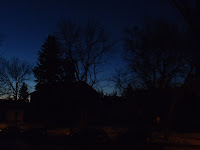 For the last few years we’ve been curing our own Easter ham with more or less an entire leg of pork.

The primal cut of pork known as the leg is separated from the loin and belly by sawing through the middle of the pelvic bone.  The section of the pelvis that is left on the loin is called the pin bone.  The section on the leg is the haitch bone.  To remove the haitch bone you have to follow its frustrating curves with your knife until you expose the ball joint where the leg meets the pelvis.  Cut through this joint.

Next the skin is removed in one large sheet.

What remains of the leg typically weighs about 15 … Continue reading.