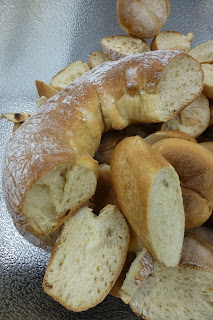 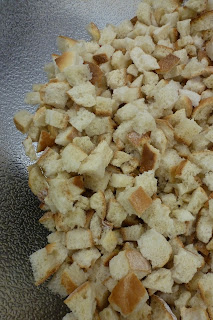 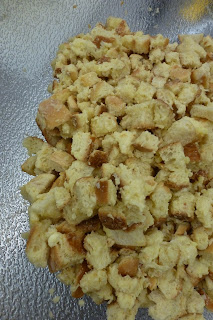 Then the mixture is rolled into cylinders.  Traditionally this was done with a towel or napkin, but plastic wrap and aluminum foil are more common these days. 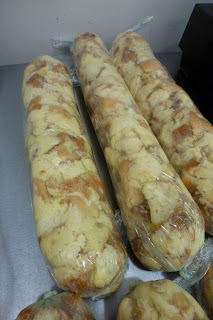 The rolls are steamed or poached until the egg has set, about thirty minutes, though cooking time depends on the diameter of the dumpling.  Once cooked the rolls can be chilled overnight, then sliced into rounds. 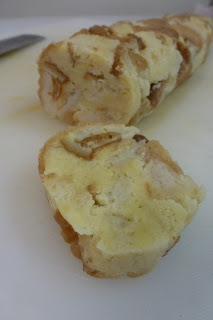 The rounds are often seared in butter for a bit of colour and crispness. 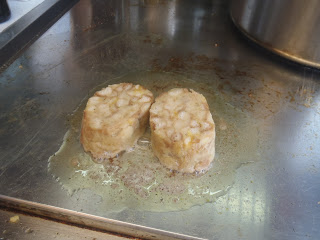 In Austria, Serviettenknödel are most often served with stews and braises.  Below you can see them with Maibocgoulash (May deer goulash) and cranberries. 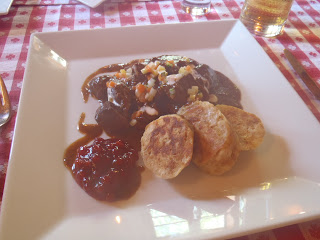 They are also an important ingredient in a regional dish called Tirolergröstl.  Tirol is a province in Austria, and gröstl simply means hash.  Tirolergröstl usually includes ham or speck, potatoes, vegetables, knödel, and a fried egg with a runny yolk. 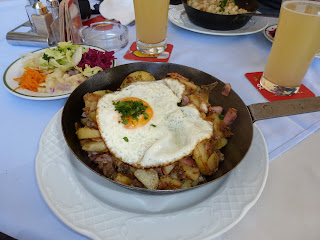 If you find yourself with bread that is more than a week old, bread that has gone completely dry and brittle, you’ll be better off making bröselknödl, or breadcrumb dumplings.  Use a food-processor to pulverize the stale bread into crumbs.  The procedure is then similar to making napkin dumplings, only breadcrumb dumplings are typically shaped into balls, not cylinders.