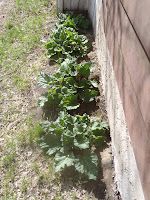 That being said, I have a theory that I’m working out.  I’m wondering if there is a way to prepare rhubarb leaves so that they aren’t poisonous.

I started thinking about this after reading about taro.  Taro root is a tuber native to India, but common in the cuisines of the Caribbean, South America, Polynesia, and much of Asia.

Taro, both the tuber and the leaves, contain a large amount of calcium oxalate.  When eaten raw they burn your mouth and throat, but boiling them dissolves the oxalates and renders them safe to eat.

Rhubarb leaves also contain a large amount of oxalate, and according to most sources this is the chief reason they are considered poisonous.  If it is this soluble compound that makes rhubarb leaves unsafe for consumption, we might be able to boil the leaves and drive off the toxin, just as in taro leaf preparation.

As I mention in my disclaimer, I’m not a chemist or a botanist.  For all I know the oxalate content of rhubarb leaves is too high for boiling to be effective.  Or maybe there are other compounds that are responsible for its toxicity.[1]

I have no idea.  I don’t plan on testing it out myself.  I’ll leave it for the food scientists.  (Though of course no one is studying rhubarb: it’s a hardy perennial that already grows in most backyards, and there’s no money to be made from it.)