Ducks and geese are fatty little creatures.  Historically even fattier than they are now.  Especially in southwestern France, where they are usually fattened to make foie gras.

This is a goose from Greens, Eggs, and Ham.  It weighs about eleven pounds.  We’re going to render some of its fat.  We’re also going to confit the breasts and legs, then turn them into rillettes. 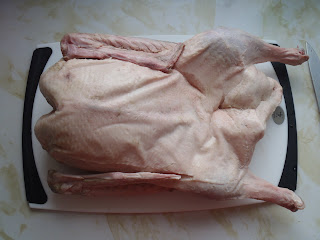 First we cut the breasts and legs from our goose.  For a description of this process, see Poultry Cutting. 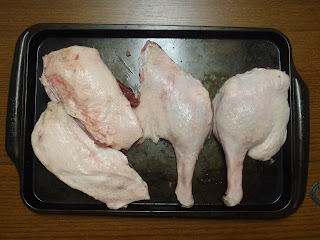 Even though the choice fat around the breasts and legs is going into our confit, there is still lots of fat to be rendered from the goose. Look for fatty trim around the neck and the opening of the cavity: these scraps can be rendered into pure fat.  What do you do with pure goose fat?  Any cooking that you now do with canola can be done with goose or duck or pork fat.  That includes frying potatoes.  Confit, described below, requires a lot of fat. The exact amount depends on the size of your cooking vessel and how tightly you can place the meat within.  Expect to use about three quarts.  There will not be enough fat from this one bird to make the confit; you’ll have to supplement with fat from another source.  I typically save trim from a few birds before I render it down. 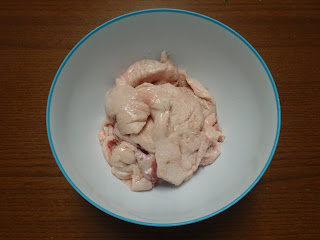 Chop the scraps into very small pieces.  Running it through a grinder is very effective.  Put this trim in a stainless steel pot with a quarter cup of water. The water helps to evenly distribute the heat. It will slowly evaporate, but by the time it’s gone there will be sufficient liquid fat to take over the role of heat distribution.

Set the pot over very low heat. After a few hours there should be clear liquid fat, and little pieces of skin and connective tissue. Strain the liquid, which will settle into two distinct layers. The top is the fat, and the bottom is essentially a highly reduced stock. The stock can be used to fortify a sauce or braise. If you leave the mixture at room temperature, the stock, being high in gelatin, will solidify, while the fat will stay liquid. At this point you can simply decant the fat. 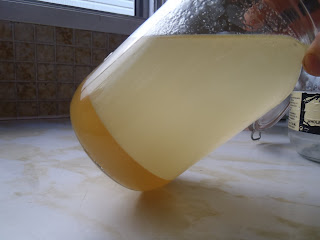 Confit is a French word that means “preserve”.  It usually refers to a specific method of preserving from the region of Gascony: lightly cured meat, usually duck or goose, is completely submerged in fat, usually duck or goose, and cooked very gently for several hours. The meat is then cooled, still in its pot, still covered in fat, and can be stored for several months. To eat, the meat is dug out of the fat and heated, usually seared so that it has a nice crispy exterior. The most common cuts of meat to be “confited” are the legs.  Breasts can also be used, though they won’t be as moist as the legs.  In modern restaurants all kinds of items are “confited,” including tomatoes and potatoes, which is ridiculous. 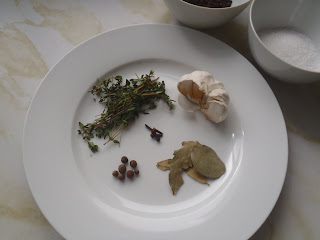 Pulverize the spices in a mill, then rub them onto the goose bits. Place the meat in a non-reactive container, cover, and refrigerate for two days. 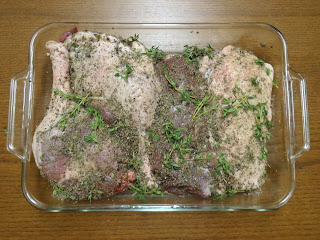 After two days, rinse all the spices from the meat. Dry the meat thoroughly with paper towels.

Heat the goose, duck, or pork fat (or some combination thereof…) until just liquid. Pour over the meat.  The meat must be completely submerged. 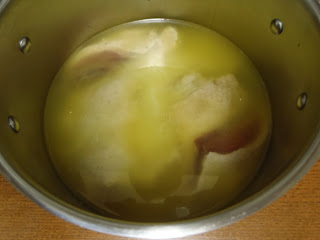 Cover the cooking vessel and place in a 180°F oven. This can be tricky in home kitchens, because even though the lowest setting on the dial might be 150°F, ovens routinely lie to their owners. Our oven, for example, runs 50°F-100°F hotter than the dial setting. This doesn’t affect the outcome of most home-cooking, but it can most certainly taint a batch of confit.

Water boils at 212°F. By making confit at 180°F, we coagulate the proteins and break down connective tissue without boiling off any of the moisture. The result is an impossibly tender piece of meat.  Invest $20 in a good oven thermometer to ensure your cooking temperature stays below 212°F.

Cooking times for confit are long, usually eight to ten hours. I leave mine overnight (hence the dismal lighting in some of these pictures).

After cooking, the meat will be tender and the fat will be clear. If your meat is bubbling under the fat, then your oven was too hot. You can still use the meat, it just won’t be as moist as it should be. 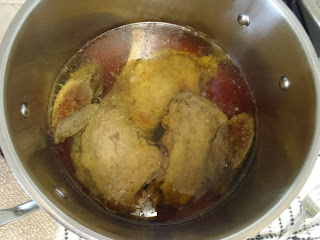 Let the meat cool in its cooking vessel, still submerged in the fat. It can be stored in the fridge for up to a month.

To use the confit, let the vessel come to room temperature, then dig out the meat and wipe off the excess fat.

On Pulling Meat from Confit Duck and Goose Legs

One very important thing when stripping the meat from confit legs.  You need to find four items in each leg:

“Death bone” is not a term of common parlance.  I invented it.  The death bone is a bone that runs alongside the leg bone, and is shaped like a pin.  If somebody unwittingly chews or swallows it, they might die.  So I call it the death bone.

The death bone is why I invented the two-bowl inspection method for confit legs.  Put two bowls in front of you.  Put the whole confit leg in one bowl.  Break apart the meat.  Locate the four items listed above and transfer them to the second bowl.  Once all four intact items are in the second bowl, the leg has been successfully cleaned.  The meat is ready to be consumed until you have located the four items.  Once found, you can discard the four items, or save them for stock.  Make sense?  The two-bowl inspection method is designed for use in commercial kitchens, where one prep cook could be cleaning dozens off duck legs at once.  Obviously at home you should just be careful.

Rillettes are a French style of potted meat.  Meat is slow-cooked in fat, then worked into a soft paste and stored in ramekins.  Pork, goose, and rabbit or hare are the traditional meats.  Rillettes are not traditionally associated with the confit, as confit is a Gascon method of preservation, and rillettes are a charcuterie item popular in Tours and Anjou.  Regional origins notwithstanding, confit makes a fantastic rillette.

Remove the skin from the goose confit. Pull the flesh into strands. 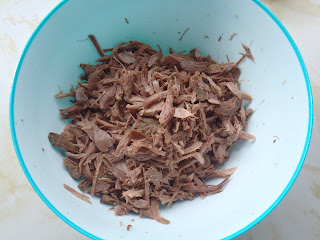 Mix the pulled meat, slowly adding some of the cooking fat. The pieces of meat will start to come together and form a coarse paste. 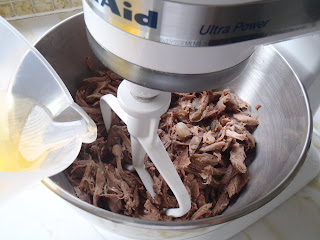 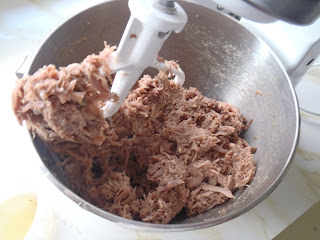 Pack the paste into ramekins so that there are no air pockets. Refrigerate to set.  A layer of fat should float to the top and form a kind of seal.  If you want a tidy seal you can pour some of the cooking fat over the surface. The meat should be submerged by about 1/8″ of fat.

Eat with toast. I don’t know why, but plain bread doesn’t work. It must be toast.