This week I cut up a chicken from Greens, Eggs, and Ham. The bird was massive. Happily I was able to try a few different preparations.  First was a ballotine, which is a portion of boned meat made into a single, flat sheet of flesh, which is then rolled around a stuffing, cooked, and served hot or cold.”Boning” by the way is the removal of bones from meat. The modern English speaker has extreme difficulty with this word, and so “de-boning” is becoming the more common verb.

Here is the leg and thigh: 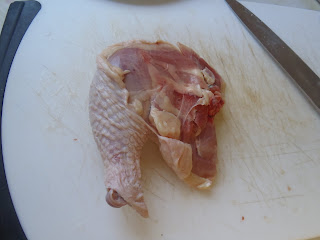 To bone the meat, make a cut to expose the length of the leg bone, which should then separate fairly easily from the flesh. 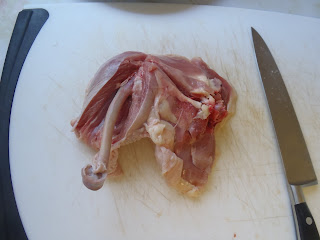 Repeat the process for the thigh bone. The thigh bone doesn’t release as easily as the leg bone, so you’ll have to cut it out of the flesh. Also, there are several tendons where the leg bone used to be that should be removed. They look like shiny, white bands.

Save the bones and trim. 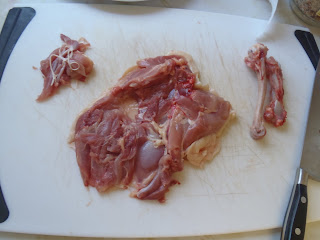 I made a simple stuffing of onions and celery sautéed in butter, with fresh bread crumbs and wild rice. 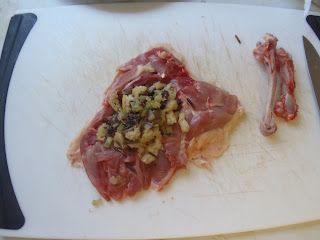 Traditionally, ballotines are tied with cheesecloth and twine. If your ballotines fit tightly enough in your baking vessel, they will hold their shape without string. 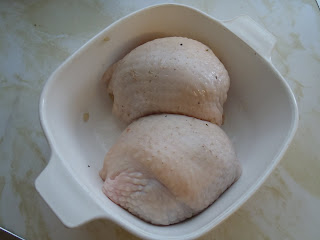 As a final flourish, I wrapped each ballotine in caul. Caul is a thin membrane with fatty veins, surrounding the abdominal organs of animals.  Wrapping meat or charcuterie in caul helps the food keep its shape, and bastes the meat as it melts during cooking.  (Update September 2012: Sangudo Meats sells pig caul, though I imagine you’ll have to order it in advance.) 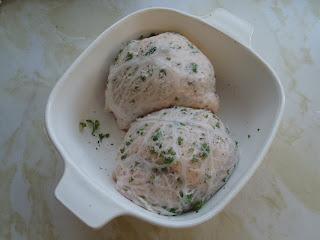 Cook until chicken reaches temperature and the skin is thoroughly browned.