This post was originally published on December 3, 2010.  Re-posted today for Eat Alberta.  I chose buffalo jerky for this year’s Eat Alberta tasting board because of the significant role that similar preparations played in the history of this province.  Please read The Story of the Buffalo for more information.

Jerky is my nominee for best representation of southern Alberta by a single food preparation.  This is partly because of its historical connection to the buffalo hunt and ranching, but also because it takes advantage of the arid landscape.  In dry regions jerky can safely be made on hot days, when the temperature is around 30°C, simply by leaving the sliced meat to hang outside.[1]

What Meat to Use.  Buffalo can be purchased at most farmers’ markets in Edmonton.  My preferred producers are First Nature Farms and Thundering Ground at the Strathcona Market, and Medicine Man at the City Centre Market.

You should use a very lean cut of meat from the hip (butcher-speak for the hind leg).  The cuts from the hip are the inside round, eye of round, outside round, and sirloin tip.  I find that sirloin tip is the most commonly available.

Clean and Slice the Meat.  Silverskin, the lustrous sheet of connective tissue that surrounds individual muscles, is the enemy of tender jerky, so remove as much as you can.  Slice the lean meat across the grain into strips about 1/8″ thick.  It goes without saying that this task is best performed with a commercial meat slicer.  Whether you’re using a knife or a fancy slicer, you’ll get more even, consistent slices if the meat is partially frozen.

Lightly Cure the Meat.   It’s worth noting that the dried-meat made by Plains Indians before European contact was not salted.  Modern jerky is always salted before drying as it helps protect the surface of the meat from pathogens during the drying process.

I’ve included a very basic recipe below.  I think the evergreen flavours of juniper, rosemary, and Labrador tea go especially well with buffalo. Cover the mixture and keep it in the fridge for 24-48 hours. 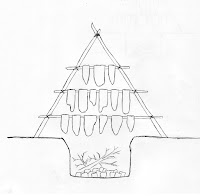 Drying Techniques.  To make jerky properly, it’s important that you don’t cook the meat.  I’ve tried the completely passive jerky technique here in Edmonton, but my meat molded before it dried (it was an overcast day, and only about 20°C: I should have known better…) For consistent results, I’ve since used a heat source like a low oven, a food dehydrator, or a barbecue.  The barbecue is good because you can introduce a bit of smoke using this simple technique.  The Plains Indians and Métis often use smoke to flavour their dried meat. Traditionally a hole was dug and a low fire kindled within. Scaffolding was erected over the hole, and strips of meat were hung until dry (crude drawing at right…)[2] At first I was skeptical about whether I would be able to smoke the meat on my barbecue and maintain a low enough temperature, but with the hood propped open about a foot I was able to keep the temperature just under 40°C while letting the smoke linger around the meat.

Strictly speaking, the jerky isn’t done until the meat is completely dry and very hard and brittle. At this point there is no moisture for microbes, and the meat can be kept safely at room temperature.  That being said, if you can pull the meat just, just before it is entirely brittle, you’ll find that the flesh is luxurious and smooth and chewy.

1. Ruhlman, Michael. Charcuterie. ©2005 WW Norton and Company Inc, New York, NY. Page 65. He elaborates on jerky’s connection to ranching, and its usefulness as a preservation technique, on his blog, in this post.
2. This set-up, and other interesting information on frontier life on the prairies, is from: Thomas, Dorine. Rubaboo. ©1981 Pemmican Publications, Winnipeg, MB.