In the States this preparation is called Canadian bacon, but we usually call it back bacon.  It’s more or less the same process as regular bacon, only done to a section of the loin instead of the belly.  There’s an old style of back bacon from eastern Ontario called peameal bacon, in which a cured section of loin is rolled in peameal (crushed split-peas) before being smoked.  Peameal bacon is still made down east, though nowadays cornmeal is used.

Back bacon is usually made from the eye of loin: the large, round muscle often made into centre-cut pork chops.  You can also use the rib- and sirloin-ends of the loin, which have more fat and flavour than the centre.  I tried the classical eye of loin.

First the loin must be cleaned.  There is a band of meat and fat called the chain (in the top right corner of the picture below) that must be cut out, but can be reserved for ground meat.  There is also some fat and silverskin (top left) that can be removed and discarded.  I cut my cleaned loin into three sections so that it could fit in my curing bucket. 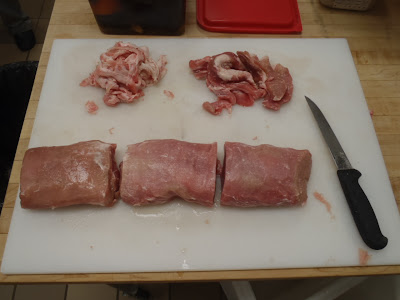 The main procedural difference between back bacon and belly bacon is that back bacon is often (though not always) brined instead of dry-cured.  My brine consisted of salt, curing salt, brown sugar, herbs, and a halved, squeezed lemon.  I used a ceramic plate to keep the meat submerged. 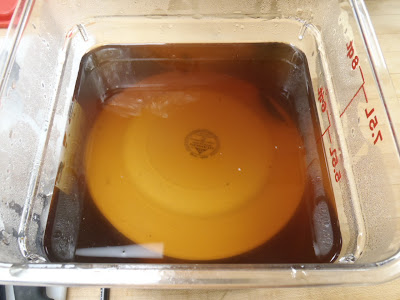 After sitting in the brine for a few days, the eye of loin is tied so that it will have a round cross-section.  In the picture below you can see three different colours on the meat: there are brown parts, pink parts, and a light grey part.  The cure, having lots of brown sugar, is responsible for the brown areas.  The pink sections are where the loin sections were either pressed against each other, or resting on the botton of the container.  The grey circle on the bottom is actually a piece of meat that was cooked by the acidity of the halved lemon.

When curing with dry rubs, you have to “overhaul” the meat: rub it down every couple of days to redistribute the cure.  I guess the same should have been done for this brine.  At the very least the loin sections should have been rotated so that the surfaces got even exposure to the brine.  This is mainly an aesthetic issue, as the meat seems to have cured properly. 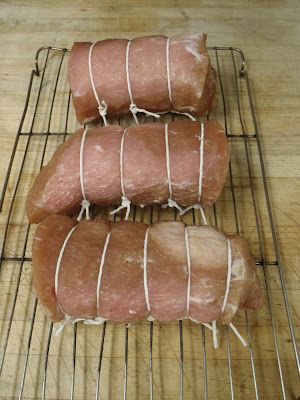 Next the loin is hot-smoked to an internal temperature of 65°C.  This is the most critical part of the procedure.  Since the eye of loin is an extremely lean cut, over-cooking will produce dry meat. 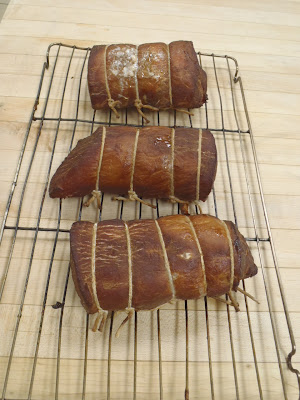 Here is the final product.  The curing salt in the brine has given the meat a rosy colour. 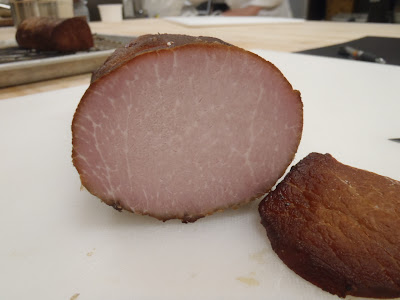 The most important thing to remember when eating back bacon: it’s not belly bacon.  It’s not the fatty slab of crazy pleasure that you might be used to.  That being said, back bacon still has its place.  If it’s brined and cooked properly it is by no means dry.  The smoke and herbs balance the piquancy of the curing salt.