If you’re not already acquainted, let me introduce you to the proud institution that is the Burns Supper. 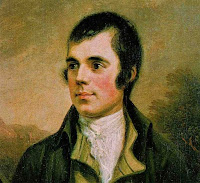 Robert Burns was born on January 25, 1759, in Ayr, Scotland. He grew up on farmland leased by his parents, and wrote several poems and songs about that rustic life, hence his famous epithet, “the ploughman poet.” His first book of poetry, published in 1786, was an explosive success, and he was quickly accepted into Edinburgh society, becoming a Freemason and working as a tax collector.

His poetry was written in an old Scottish dialect, one that modern English readers find more difficult to understand than Shakespeare. Even so, you probably know some of his verses. He wrote lyrics to several Scottish folk melodies, including “Auld Lang Syne” and “My Luve’s like a Red, Red Rose.” The title of John Steinbeck’s short novel “Of Mice and Men” is from a Burns’ poem called “To a Mouse”:

But, Mousie, thou art no thy lane (you’re not alone),
In proving foresight may be vain:
The best laid schemes o’ mice an’ men
Gang aft a-gley (often go awry).

Newer editions of his poetry are thoroughly footnoted to guide the modern reader. Burns was a forerunner of the romantic movement, and his poetry is a very enjoyable read, especially if you read it aloud in a hack Scottish accent, as I do.

Burns died in 1796. In 1801, his friends held the first Burns Supper, in Greenock. I don’t know much about that first celebration, but the modern Burns Supper is an elaborate ritual. Dinners start with grace, usually the Selkirk Grace:

Some hae meat an’ canna eat,
An’ some wad eat that want it.
But we hae meat, an’ we can eat,
Sae let the Lord bethankit.

After the preliminary courses, a plattered haggis is piped into the dining room and set at the head of the table. (You can read about how we make the haggis here.)  A Burns poem called “Address to a Haggis” is read. Part of the poem describes a man wiping a knife, and plunging it into a haggis, and the reader usually does these actions in tandem with the poem. After the address the guests drink a toast of scotch whisky to the haggis. The haggis is usually eaten with mashed turnips and potatoes (“neeps and tatties”), which together are called clapshot.

After the main courses, a speaker delivers the Immortal Memory, a reflection on the life and work of Robert Burns. Later, there is another speech called The Toast to the Lassies. This was originally designed to thank the women who had prepared the meal, but today usually features the speaker’s view of women, generally. It is followed by the Reply to the Toast to the Lassies, these days usually a woman giving her views on men.

Burns Suppers were once very common in Canada, especially down east. In the late 1700s Canada received thousands of Scottish settlers, many of whom became notable fur traders and merchants. Notable Canadians of Scottish birth include Sir John MacDonald, Alexander Graham Bell, and Donald Smith, better known in these parts as Lord Strathcona. Scottish immigrants established St. Andrew’s Societies as a way of preserving their traditions, and the annual Burns Supper was often the largest and most raucous event of the year.

While my sister was studying in Edinburgh, I took a renewed interest in my Scottish heritage. (“Suddabys,” by the way, are originally from Yorkshire, but our other ancestral family names include “MacMillan” and “Airth.”)  My sister brought me a fantastic book called The Scots Kitchen by F. Marian McNeill, which has given me a respect for Scots cuisine. When I first read about Burns Suppers, I resolved to start hosting them myself.  The first supper was held in 2011.

Here is some footage from the 2012 supper, graciously filmed by Kevin Kossowan.

The program from that night:

Address to a Haggis
Haggis: a gallimaufray of offal
Clapshot: neeps and tatties

Tunes for a Burns Night